Great things to do in Berlin in autumn

Berlin is a city with many faces, each neighbourhood has its own identity, its own draw. Some attractions really come into their own in autumn.

Autumn brings all sorts of great things to the German capital, from seasonal food and autumn colours to festivals. There are also things to do throughout the year that just shine that much brighter in the fall season. Here are our top tips for when you visit Berlin in autumn. 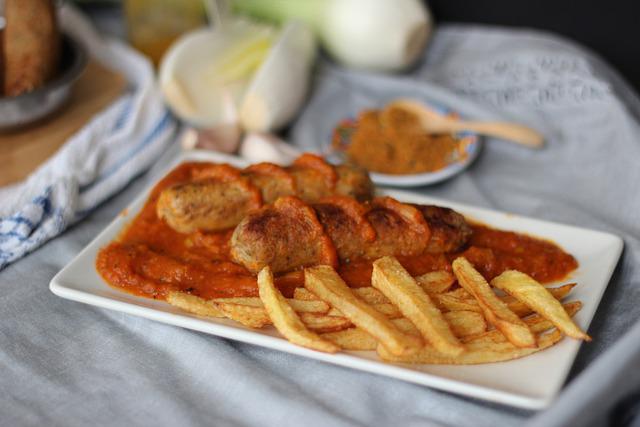 There is no escaping the currywurst in Berlin with over 800 million plates served every year across the country, over 100 million of them in Berlin alone. Currywurst is good year round but the spicier sauce options make for a warming snack in autumn. Invented in the Charlottenburg neighbourhood after the war, it has become a must try to complete any trip to Berlin.

Some of the best can be found right where it was invented in Charlottenburg at Curry 36. If you are in Mitte, you can try Curry Wolf near Madame Tussauds, or Dom Curry next to the Deutscher Dom on Gendarmenmarkt. Really it is hard to not find a place where you can try some currywurst.

The lungs of the city

Tiergarten is to Berlin as Hyde Park is to London and Central Park is to New York. The perfect place to escape the hustle and bustle of the city , even with Straße des 17. Juni running straight through the park. In autumn the trees of the 519 acres park, slightly bigger than Hyde Park, turn it into a magical place full of colours and soft light.

Aside from the tree lined paths and lawns, the park is also home to many memorials and cultural sights. Near the Brandenburg Gate, there is the Soviet war memorial, the Global Stone project and the Memorial to the persecuted homosexuals under National Socialism. At the heart of the park stands the Victory Column, which commemorates the Prussian victory in the Second Schleswig War and which has a lookout point at the top of the 69-meter-high tower.

If you want to give your feet a break you can find Café am Neuen See, on the shore of one of the lakes of the park. It offers a scenic beergarden and if the weather gets just a little too chilly you can warm yourself by the fire inside. Some time in Tiergarten in autumn is sure to be rewarded with beautiful sights of autumn foliage. As autumn sets in the days get shorter and darker but the city has a solution to brighten these day. Since 2005, the Berlin Festival of Lights brings beautiful light art installations to the city. Landmarks, streets and squares from East to West Berlin tell magical stories through the use of light.

One of the best ways to enjoy this festival is with a tour that takes you to all the city’s most famous sights and includes multiple stops so you can take photos. Our Tour of Lights is just what you’ll want for this fun event. Join us at Neptunbrunnen/Alexanderplatz at 7 pm, where we’ll start the tour with a surprise.

A meal with a view

Whether it is breakfast or dinner, who doesn’t want a beautiful view of Berlin while enjoying delicious food. In Berlin you can do so on a unique location: on top of the historic Reichstag building. The German Bundestag is the only parliamentary building in the world with a public restaurant.

The Käfer Dachgarten-restaurant serves modern German cuisine with fresh, regional products for breakfast, lunch and dinner. Autumnal produce in Germany is especially good, so there is no excuse to miss out on a visit to this place. Make sure to book at least 48 hours in advance and bring valid ID, due to the security measures for the Bundestag. Not only do you find five museums together on this one island and can you visit them all with one ticket, the location itself is a UNESCO World Heritage site. The first museum build on the site is the Altes Museum, which opened in 1830 to give the general public access to the art collections of rulers and princes.

The second was the Royal Prussian Museum, which was destroyed during the war. Restoration of the museum only started in 2003, and when the museum reopened in 2009 it was renamed to the Neues Museum. It is the home of the famous bust of the Ancient Egyptian queen Nefertiti.

In 1876 the Alte Nationalgalerie was added, its architect was inspired by the Acropolis in Athens. The last two museums to be added to the island were the Bode Museum in 1904 and the Pergamon Museum in 1930. The latter is home to the breath-taking Pergamon Altar and Ishtar Gate. Where better to spend a rainy autumn day?

Get off the beaten track for a visit to the authentically restored Marheineke Market Hall. Inside the 2500 square meter hall, you’ll find stalls with organic and regional fresh food, such as meat, cheese, milk, bread, fish, juices, fruit and vegetables, as well as flowers, specialities from the Mediterranean and the Arabian Peninsula.

There are also restaurants, a bookstore and crafts and services such as tailoring, shoemaking and locksmithing. On Saturdays and Sundays, there is a flea market right next to the Market Hall on Marheinekeplatz with great bargains on practical items, books, records, jewellery and toys. When you are done shopping be sure to visit one of the many neighbouring cafés or restaurants to relax and enjoy the atmosphere.